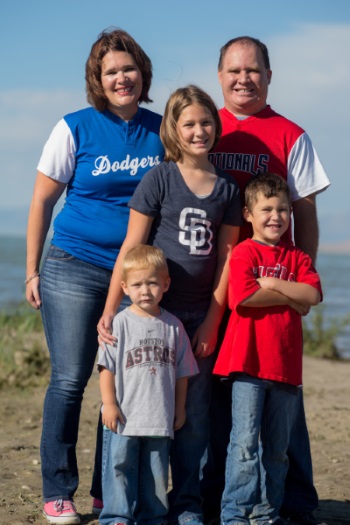 If you’d asked us 8 years ago how CHD affects our family, we’d be telling a different story. The first 3 years of Maddox’s life, our world revolved around surgeries, appointments, and medication. It was difficult to balance our time between all of that and our then 3-year-old daughter. As the years have gone by, we have settled into our own kind of normal, and it’s hard to believe that we can go days without even thinking about it.

8 years later, our son Maddox is thriving. He loves to play sports, play with his brother and sister, sing in the choir, and participate in cub scouts. And he dislikes school like most boys his age. It’s amazing to watch him accomplish things we were never quite sure he’d get to do.

While Maddox’s CHD doesn’t currently affect our day to day life, it has given us so many great opportunities to get to know other CHD families and make life long friends. One of the kid’s favorite weeks of the year is attending Heart Camp with other CHD’ers and their siblings. It’s so great for them to know other kids who have similar lives to theirs. As parents, it’s been a blessing to talk with other parents and see other kids thriving. From the beginning, that has helped us have hope.

We asked Maddox “What’s it like to have a special heart?” This is what he said:

“It’s fun! There are so many fun things you can do, like go to Camp Hawkins. And I get to be in Mascot Miracles and hang out with the mascots.”

Maddox doesn’t talk about it much unless we ask him specifics. He takes an aspirin in the morning and goes about his day. When we told him about his upcoming yearly cardiology appointment, he was super excited. He loves going to Primary Children’s. He said he hoped they needed to do an echo, because that means he can watch a movie. Oh, and there are video games in the waiting room, AND if they have to do a poke, he gets a prize. He has such a positive outlook on life, and we are grateful for his easy-going spirit!

Bailee is 11 now, and had this to say about being the big sister of a ‘heart kid’:

“We get to go to a lot of things, like the different groups and activities for kids like him, and we get to meet a lot of cool people. Sometimes it can be hard. When he had a lot of surgeries and mom and dad weren’t around as much it was hard. He always needs more attention, and sometimes that is hard. When he was younger and had to be on the oxygen we had to watch him carefully. It can be scary if he has to have a surgery, even a simple one not on his heart. I worry about him.”

Landon is 3, and was born a few years after Maddox’s last surgery. He hasn’t known the worry that Bailee has. He loves to sneak up on Maddox and tackle him, he loves to interrupt all of Maddox’s games, and he loves to snuggle up and listen to Maddox read to him.

Overall, our family feels grateful to the doctors and nurses who have helped us have a pretty ‘normal’ life. While battling CHD isn’t what we would have chosen, the people we have met because of it and the experiences we’ve had have made it a pretty amazing journey. We know there will continue to be ups and downs, but these last few years of ‘normal’ have been a gift that we will always treasure.